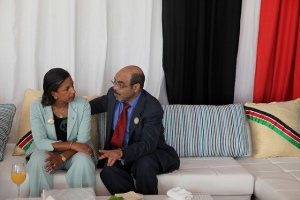 Many rumors abound regarding the future of America’s top envoy at the United Nations, Susan E. Rice. While she is still working as the United States ambassador to the UN, some media reports are predicting that she will become President Obama’s next national security adviser, succeeding Thomas E. Donilon. As to who might succeed her, several names have been floated among US foreign policy experts in New York and Washington D.C.

Although she withdrew her candidacy to be secretary of state on Dec. 13, 2012, Rice’s relationship to Obama is still close and she belongs to his inner circle — next to Donilon and Obama’s chief of staff, Denis McDonough. There are two benefits of her becoming the national security adviser. First, no Senate confirmation is necessary for that position. Especially after her dispute with some Congress members, such as Senators John McCain (Republican, Arizona) and Lyndsey Graham (Republican, South Carolina), concerning the deadly Benghazi attacks on the US consulate in Libya on Sept. 11, 2012, this appointment could be less controversial.

Second, even if her new job would be less noted by the US public compared with the secretary of state position, the national security adviser usually has more influence on the president’s foreign policy decisions. Colum Lynch, who writes the Turtle Bay blog for Foreign Policy, and others predict that Rice could take the new job right after the US has its presidency at the Security Council in July. (The presidency rotates monthly among the 15 members in alphabetical order.) Rice could also remain at the US mission to the UN for a while or even through the rest of Obama’s second term, until 2016.

Regardless of the rumors, Rice’s rise is already a statistical exception compared with all 26 former regular US ambassadors at the UN since 1945. First, she is the longest-serving US chief envoy at the UN in the last 50 years and the third-longest envoy in service ever, with more than four years, after the former Vermont senator, Warren R. Austin (who served around six years, from 1947 to 1953, under President Harry S. Truman), and the famous former senator from Massachusetts, Henry C. Lodge Jr. (around seven and a half years, from 1953 to 1960, under President Dwight D. Eisenhower).

And though Rice is the third female US ambassador to the UN (after Jeane Kirkpatrick under President Reagan, from 1981 to 1985, and Rice’s mentor, Madeleine Albright, under President Clinton from 1993 to 1997), she is the first African-American woman holding this important post. It has been a cabinet-level position since 1953 with some discontinuities and is often called the “second secretary of state.” Moreover, Rice, 48, is the second-youngest US ambassador assuming the UN office. This is just behind the first African-American male US ambassador, Andrew J. Young, who was President Jimmy Carter’s initial appointment and was around two years younger than Rice on her appointment.

Beyond these statistics, Rice’s biography and personality offer insights into her behavior. Her grandparents emigrated from Jamaica to Portland, Maine, in the early-20th century. Her parents supported Rice, who has a brother, through her graduation from Stanford, where she earned a master’s degree, and a doctorate in international relations from Oxford University. Her dissertation topic was “The Commonwealth Initiative in Zimbabwe, 1979-1980: Implications for International Peacekeeping.”

In 1993, she joined the Clinton administration as part of the National Security Council staff and became the youngest person to serve as a regional assistant secretary of state in 1997, taking on the African affairs portfolio during a particularly challenging decade. While in that position, Rice played a key role in addressing conflict resolution in Africa, helping to develop a US response in Sudan and the Horn of Africa. But after her government service, she would never forget the international community’s inability to stop the genocide in Rwanda in 1994, which still determines her ideological framework at the UN.

This might be why she supported Obama’s recommendation in August 2011 to create an interagency Atrocities Prevention Board and corresponding review on mass atrocities. Later, Rice became a senior fellow at the Brookings Institution and was the senior foreign policy adviser to Obama during his campaign in 2007-2008, before she became the ambassador at the UN in early2009.

When Rice took the office, she tried to carry out and combine Obama’s foreign policy change while becoming a reliable contact at the world body after the previous eight years under George W. Bush, when there were four different US ambassadors and three interim ones.

First, the hard facts of change: During Obama’s first term, Rice increased the US credibility at the UN and delivered a message by paying back its dues of about $1 billion toward UN peacekeeping. The US election to the Human Rights Council in 2009 for three years and the re-election in 2012 have been the second biggest leap in US-UN relations, after the previous Bush administration refused to participate in the new council.

Then there are the soft facts about her personality: Even though some delegates, journalists and political scientists describe her as a sometimes candid and direct diplomat as well as a brisk person who is effective and persuasive, Rice started early and successfully networking with other diplomats in New York as she secured her position in Washington by spending more than half of her time each week in the capital.

Like some of her predecessors, Rice is underlining her close position to the president by upgrading the US-UN mission to a “second Department of State” and communicating directly to the White House, as Arnold Beichman wrote about the potential scope of action by US ambassadors in his book, “The ‘Other’ State Department,” in 1968. Rice understands her job to be two ambassadors in one: representing US interests at the UN and explaining the values of the UN to the US public and Congress.

In his 2012 Foreign Policy article, “The Point Guard,” James Traub characterized Rice as a crucial player for Obama at the UN, still a main multilateral area of US foreign policy. This is correct: During her tenure, she has never tired of communicating the administration’s commitment to more multilateralism and working with the UN and its member states, which reflects more realistically the world today, a post-hegemonic era, in her view.

At the UN, it seems to be that with her stubborn personality and leverage, she has been successful in nearly every main debate at the Security Council and in Washington on UN topics: she got majority approval for the intervention in Libya, reached tougher sanctions against Iran and North Korea and has worked to allay the tensions between Sudan and the youngest UN member state, South Sudan. She was not acting alone, but she was often the driving force behind such moves. The biggest exception and personal setback for her — besides her first and only Security Council veto in 2011 on the Israeli-Palestinian conflict (it condemned Israeli settlements in the West Bank) — is the civil war in Syria, which has led to more personal tensions between Rice and a colleague, the Russian ambassador Vitaly Churkin.

In general, however, most of the other delegates are happy to work with Rice. As Traub wrote: “What diplomats want most from a U.S. ambassador is the power to deliver what he or she promises.” Her close relationship as political appointee to Obama makes that possible.

The new US secretary of state, John Kerry, announced that he would like to meet with Rice once a week to exchange ideas. This could become more than necessary should she become Obama’s next national security adviser. Both could support Obama’s change of Middle East policy, especially on Syria, to a more active US role.

Who might succeed Rice as the US ambassador at the UN? If Rice were to resign this summer, there are assumptions that the candidates could be one of the three political appointees: Samantha Power, Tony Blinken and Eileen Donahoe or a career diplomat, William J. Burns.