WFUNA/IFUNA Conference “R2P: What next?” in New Delhi 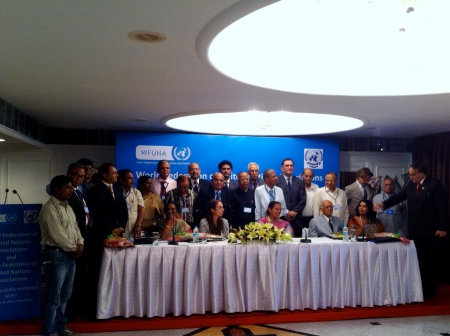 Panelists and IFUNA members after the conference, (c) Gerrit Kurtz.

The public debate on the responsibility to protect civilians from mass atrocity crimes (R2P) has largely been confined to academics and policy circles in Western countries. This enhanced the frequent perception among developing countries of R2P as a concept from Europe and the United States. My research on India’s foreign policy on R2P confirms this impression so far. For this reason, the World Federation of United Nations Associations (WFUNA) has decided to organize outreach and awareness raising events for R2P as a concept around the world. Previous seminars have been held in Beijing, Caracas and Nairobi. On 8 October 2012, New Delhi was the next destination under the headline “R2P: What next?”. The conference was organized in cooperation with the Indian Federation of United Nations Associations (IFUNA).

In four panels, the main elements, challenges and concerns regarding R2P were presented by an illustrious number of panelists, both from India and from abroad. While some diplomats delivered official views, most stressed that their comments were made only in a private capacity, giving the audience an insider view with background information about R2P. Although no presentation focused explicitly on any specific case, the recent events in Libya and Syria, and even more the interventions in Afghanistan and Iraq were close on many people’s mind, both on the rostrum and in the audience.

After an introduction into the genesis and main elements of R2P by Laura Spano, the R2P program officer of WFUNA, Ana Paula Kobe from the Brazilian embassy presented her country’s views on the topic, focusing on the still recent Brazilian proposal of a responsibility while protecting (RWP). She recalled the main elements from the concept note Brazil submitted to the UN in November 2011, stressing that the use of force for protection purposes may cause unintentional harm and destabilize societies, which is why it should only be used as a last resort. Crucially, she stressed Brazil’s intention to spark a genuine collective debate on R2P and RWP, which should evolve together. While a number of European countries have confronted the concept with skepticism, seeing it as an attempt to delay urgent action if needed, she emphasized that this dialogue should not be seen as “an evaluation of anyone’s actions”, implicitly referring to the intervention in Libya. When pressed to provide more details both on the idea of criteria for Security Council (SC) decisions on the use of force and of greater accountability during the use of force, she declined to give more specifics. RWP is “not a ready-made concept”, she said, rather an impulse for debate. Nevertheless, she gave a small hint concerning Brazil’s intentions regarding the proposal, which should “guide us to a new multi-polar order based on dialogue and cooperation.”

Focus on the critique of R2P

Most of the following panelists and members from the audience focused their interventions on the critique of R2P. Former Indian ambassador Kishan Rana saidIndiahad been cautious and remained cautious, as “lofty international principles” were often applied selectively. R2P was measured by its application, he continued, and in Libya, NATO and allied forces had clearly exceeded their mandate.

Ambassador Deepak Bhojwani, recently retired Indian ambassador to Cuba, Colombia and Venezuela, agreed that selectivity had to be avoided. The use of force had often effectively prolonged conflicts instead of alleviating suffering, while international criminal law needed to be applied universally. Those who were responsible for the killing of 100,000 Iraqis (read: the US and allied forces) were also guilty, but “they will never be punished”. Similarly, if the SC referred a situation to the International Criminal Court (ICC), it must not exempt its members intervening on its behalf (as it did in the case of Libya).

The Libyan case had shown how the “likely misuse” of the concept of R2P for the purpose of regime change was an issue of ongoing debate, the message by the Indian permanent representative to the UN in New York, Hardeep Singh Puri, read. Mr. Rana underscored this sentiment by calling the third pillar of R2P, which allows coercive measures including military intervention with SC approval, as being tantamount to “hitting people on the head.”

Takeshi Osuga, political minister at the Japanese embassy and previously working for his country’s permanent mission to the UN in New York, developed his criticism in a different direction. While the emphasis on prevention in the concept’s promoters’ discourse was welcome, it was questionable whether the talk about general measures for prevention including development aid, human rights and democracy promotion to be discussed under the R2P heading had any added value. Those policy measures could also be discussed, perhaps more successfully, one might add, under different headings.

Ambassador Prasad, the High Commissioner of Sri Lanka to India, added a whole number of substantial criticisms against the concept. More specifically, he uttered four concerns: early warning might be politicized by exaggerated media reports, the SC lacked adequate authority without expanded membership and monitoring by the General Assembly, interventions might be misused for political purposes, and R2P operations might drain resources from other important programmes. Coercive operations always entail compromises, and are never equipped with enough resources. He rejected some critique’s charge that R2P “legalizes that what used to be illegal”, because of the possibility of chapter seven interventions as stipulated by the UN Charter.

Both on the rostrum and in the audience, there was a strong focus on the notion of sovereignty as weapon of the weak against the powerful, fitting to a post-colonial state. India, the journalist Jyoti Malhotra argued, was preoccupied with the denial of foreign interference in Kashmir and the Northeast or avoided engagement because of internal riots such as those in Gujarat in 2002. (Just recently at the general debate, India and Pakistan quarreled very publicly about the status of Kashmir.)

Mr. Sheshadri Chari from the Institute for National Security Studies and Research showed how India had been practicing R2P long before the concept came into being, as it intervened in then East Pakistan (today Bangladesh) in 1971 “in response to genocide” and a massive refugee crisis. (The secretary-general of IFUNA later added that India’s intervention in Sri Lanka in 1987-1990 had to be seen in the same light). He declared China’s occupation of Tibet and subsequent policy as “cultural cleansing“ and “genocide”, which is also the official line used by the Tibetan government in exile in India, including by the Dalai Lama. Moreover, he proposed there should be “pillars 2a, b, c” as diplomatic and political engagements to assist states in their responsibility to protect civilians could be codified. This would all fit in well with the centuries-old Hindu vision of Vasudhaiba Kutumbakam, or “the world is a family”, where there exists a “collective responsibility to protect each other”.

Former Indian ambassador Kishan Rana agreed that India should embrace R2P and keep engaged in the dialogue, while making its reservations heard. While France and others demanded R2P action, as the Burmese government did not take appropriate action after cyclone Nargil hit Myanmar, India’s engagement approach has, after all, proved successful. Ms. Malhotra tried to extend the scope of R2P, when she demanded that India also had a responsibility to protect Maldevians from the resurfacing of autocratic structures (this extension of R2P was later contested by a member of the audience). Countries from South Asia looked to India for assistance in “great hours of need.” This was also the case in Sri Lanka, where there was “ethnic cleansing, some people say there was genocide”.

Almost all panelists as well as members of the audience made out one “crux”, as ambassador Prasad put it, “the democratization of global governance institutions”, in particular the SC. Mr. Osuga, true to the spirit of the G4-Initiative (by India, Brazil, Japan and Germany, the last of which that was not represented officially at the conference), reiterated this demand and also related it to the reform of the SC’s working methods including the use of the veto in R2P situations. Others called for a universal and “judicious” implementation of the R2P principles, in line with the Brazilian proposal, without giving more details, however.

The discussion throughout the day came back to a number of key issues that apparently occupy the minds of Indian elites. Sovereignty was the only defense shield of weaker nations against the imperial intentions by the major powers, how could it be qualified? If lofty ideals such as democracy, human rights or the R2P are only ever applied selectively, how can they ever be successful? The responsibility to protect, one member of the audience claimed, should be defined as “responsibility to protect against the misuse of power”. Speakers frequently referred to the conflicts in Iraq, Afghanistan or Palestine, displaying a deep-seating sense of anxiety about potential American hegemony without accountability.

While it is true that international justice needs to be universal, the promoters of R2P have always argued that action by the international community should not be held hostage by it. While it might not be possible to intervene everywhere, it was still right to protect civilians whenever possible. Furthermore, it seems to be rather questionable whether an SC with an expanded membership would be able to deal more effectively with crisis situations, as long as its working methods remain unchanged. This year’s failure of the S5 initiative was a particular disappointment in this regard.

It became apparent, however, that even among this audience of people active in UN Associations across India, students and policy elites, the concept of R2P was hardly known and understood. Debates like those during the conference should thus provide a crucial stepping-stone in establishing a more substantial foundation for a genuine public debate about these issues in India and beyond.

Much is said about the responsibility to protect; yet we hear little about responsibility in protecting. These are concepts that we must develop together.

Sequencing between the three pillars of R2P should be logical, based on political prudence. It does not mean the establishment of arbitrary check-lists.